CREPORTFRAME only applies to published reports on the web. In Excel the text “CReportFrame” is returned.

The function creates an in-line frame that displays the given page or report specified by URL. The web page inside the frame is displayed from the top left down.

The rendered CREPORTFRAME will be the width of the cell (or merged cells) containing the CREPORTFRAME at the time of publish.

The height is determined by the Height argument.

This formula is not supported when sending a report to PDF.

The URL of the page to be called into the body of the in-line frame (iFrame).

The name given to the iFrame on the report. This name can be used in conjunction with CHYPERLINK to target a CREPORTFRAME for update without refreshing the entire contents of the page on which the CREPORTFRAME resides.

Determines if scroll bars will appear in the CREPORTFRAME where the called URL exceeds the size of the iFrame.

The height of the frame. This can either be given as the percent of the size of the cell (or merged cells) containing the CREPORTFRAME upon publish, or pixels (px). For example "500px" results in a height of 500 pixels.

Any addition CSS styling you want to add to your iFrame.

URL arguments or Member Unique ID’s of dimension slicers. For example, this could hide the toolbar in reports by setting Arg1 to "ht=true".

To call a report, or part of a report into the body of another report. This is useful to combine reports into linked or guided analytics, or incorporate other pages available from the web. When called from a menu page, the CREPORTFRAME can provide a live preview of a called report.

URL is the only required argument.

The CREPORTFRAME formula is in cell C14, and in this instance, includes the CALUMO toolbar. The URL is from an existing published report, which can easily be found by clicking on Copy URL to clipboard on the report tab in CALUMO or by using CINFO (with ReportURL as the first argument).

On publishing, the following page is presented: 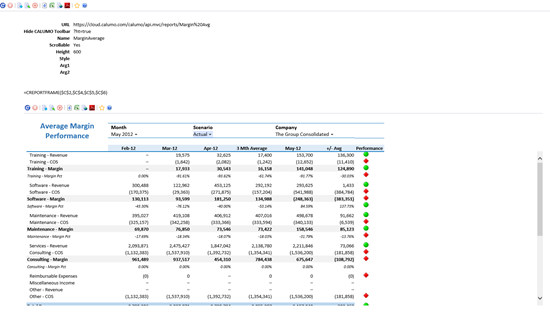 You will notice the CALUMO toolbar is present in the original page, together with the frame report.

To hide the toolbar in the frame report, set Arg1 (or any ArgN) to "ht=true". Alternatively, include the string ?ht=true at the end of the URL.

Now when publishing, the following is displayed: 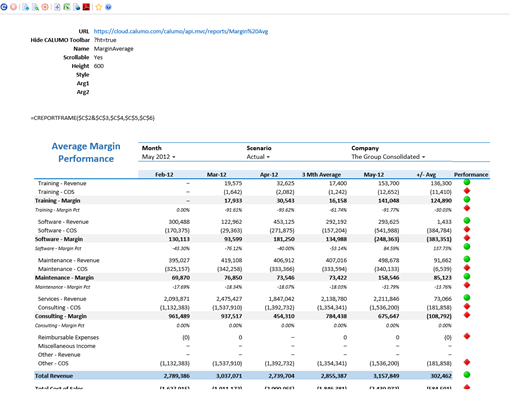 It is possible to have more than one frame per page. The following report is made up of 5 individual reports. In Excel, it looks like:

Report frames have been highlighted in black to help identify the width of the report. Reports to be used are in column B, with the corresponding heights specified in column J. In all CALUMO report instances, the toolbar has been hidden (through the inclusion of ?ht=true). When published, the report displays as: 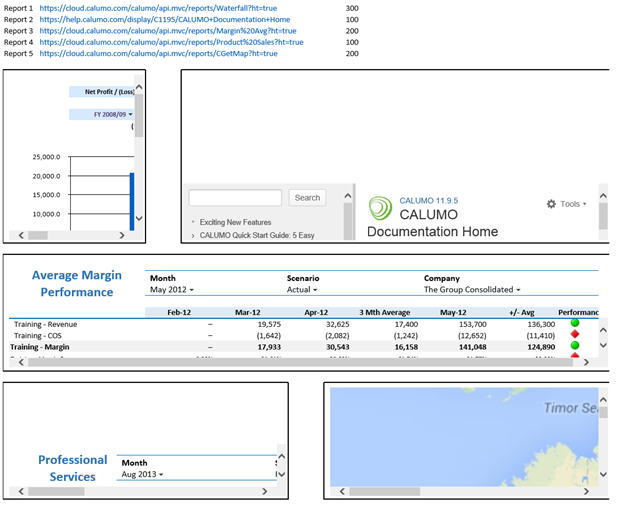 You will note that even though differing heights have been specified, the border illustrates the largest height for the row. Report 2 is placed as expected, but report 4 is at the foot of the frame. To bring to top for report 4, in Excel adjust the cell alignment to the top of the cell:

On republishing we observe: 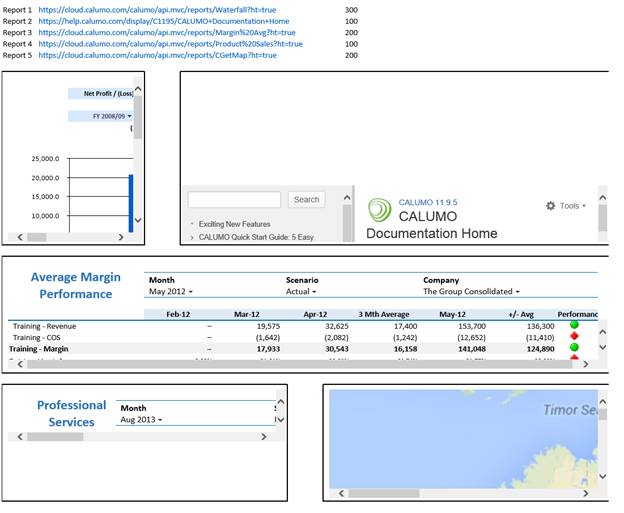 Report 4 has now moved to the top of the frame. If we were to remove borders in Excel and republish, we would obtain the required layout.

Altering our layout to the following and publishing:

We can obtain any layout we require: 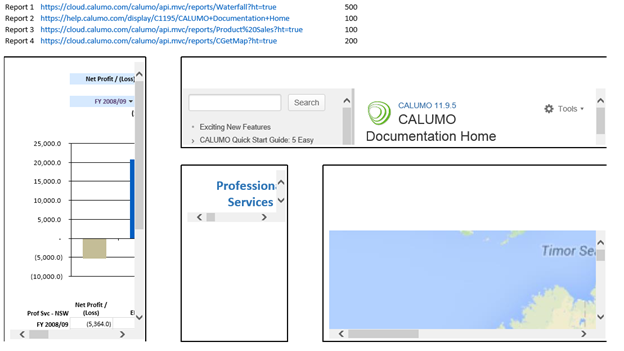