The CCONCAT formula is used to concatenate all values from each range/value in the argument list.

If the 1st argument is a string value (ie not a range) it will be used as a delimiter for the remaining arguments. Such that =CCONCAT("/", "snow", "ball") will return “snow/ball”

If the value is a string literal (not a range) then it will be used as the delimiter for the remaining range arguments.

Specify the value from the nth range to concatenate (up to 20 separate ranges/values can be used).

One of the key usages of this formula is to allow you to lay out your MDX for a CALUMO report in Excel in a way that is easily maintainable and then use a CCONCAT formula to bring it all into a single cell that all your other CALUMO formula can use.

It will work with any type of Excel cell. 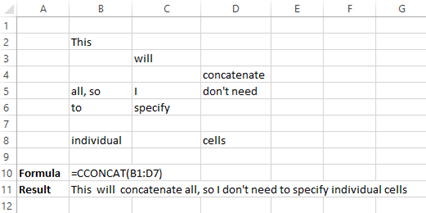